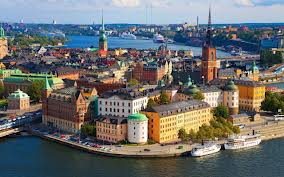 Years ago, I attended the Nobel Prize award ceremony, a few days celebrating the new awardees in medicine, economy, literature and more, EXCEPT for the Nobel “Peace” Prize which is not awarded in Stockholm but in Oslo, Norway.

I stayed at the Grand Hotel overlooking the Royal Palace.  Every December 10, the same function repeats, the award ceremony, the royal banquet with the royal family in

attendance, and some other smaller tokens as the morning St. Nicholas which I missed.

The shine and splendour of the Nobel Prize has gone tarnished with the years.

On the one hand, the Swedes know that over 20% of Nobel prize winners are Jews.  Naturally, most of those Jews are non-observant, liberals.

On the other hand, they have had no qualms giving the Nobel “Peace” Prize to Arafat, to Mandela and, the one has boomeranged, to Obama for a “peace” he never has wanted, kept or respected.

Meanwhile, Sweden has, almost like all other Scandinavian countries, opened their doors to Muslim immigration, who have brought along their Islam, their Koran, their sharia, their terrorism, their abuse against poor women, and their other horrific practices.

Sweden’s auto-defeatist and suicidal policies have gone so far as to legalise the criminalisation of any critic against Islam.

Now, as ultimate affront against the civilised world, Sweden has recognised Palestine and its barbarians, those who have been attacking and massacring the innocent population in Israel.

Indeed, Palestine is now acknowledged by Sweden as if though it be a country, when it’s not and if it’s up to G d, it will never be.