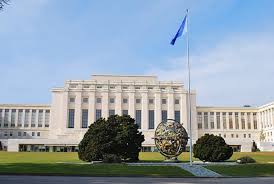 WOW…   While the media emphasizes the death of Michael Brown as a that of a criminal act from the police, they forget that there are evidence and witnesses that testify how the 6’4”, nearly 300-pound self towering over a petrified convenience-store employee, robbed the store of cigars, started to leave and then turned.  He puffed out his chest, stepped towards the small clerk intimidating him making him back up.
Then, Brown attacked the officer in the patrol car, as he tried to grab for the officers gun which then went off and shot Michael in the hand. Michael ran off, turned and came back towards the cop. Police brutality…  really?

Nevertheless, Lesley McSpadden, mother of the 18-year-old man whose death at the hands of that Ferguson police officer in August sparked weeks of protests, is going to Geneva,
Switzerland next month to speak about her son and other victims of police brutality in front of the United Nations.
While Mike Brown’s killing is still under investigation by federal officials, and a local grand jury has the task to decide whether to charge officer Darren Wilson for his death, they are supposed to make an announcement any day — with few in Ferguson believing that it will end up in indictment.
The trip — which was recently made public by organizers and promoted under the tagline “Ferguson to Geneva” — is meant to make a case, to as wide an audience as possible, that both Brown’s killing and the militarized police response to protesters demanding justice for him, are a matter of human rights.
“It’s actually covered by article one of the convention against torture,” Justin Hansford, a law professor at Saint Louis University and co-author of a brief to the UN body filed by Brown’s family and local activists, told VICE News. “When the government has all the guns, all the force, and when they can kill people with impunity and without fear of being found guilty of a crime, that’s a classic example of state violence.”
The UN delegation is yet another attempt to shift the terms of the conversation on Ferguson, and to appeal for the support of a broader community.
Taking the issue to the UN is largely “symbolic,” organisers admit.
“It’s about taking the conversation to the global community in general,” Wade said. “It’s for us to show that now even the UN is interested in what’s happening in a real small city called Ferguson, and you should be interested as well. You should see this as an issue that isn’t just one instance, one police officer, and one man. This is what’s happening all over the country.”
The point of taking Ferguson’s plight to an international forum is not so much to embarrass US officials, Wade said, though Hansford said the group hopes to connect with a delegation of administration officials who will be in Geneva at the same time. “While we’re out there it would be great to talk to the US government,” he said. “They’ll be there, it would be wonderful it they talked to us.”
In all likelihood, the administration may be behind this “globalist” approach.  One more manner to undermine the authority and sovereignty of the United States of America.
Just as the former Secretary of Defence, Leon Panetta and General Martin Dempsey, Chief of Joint Chiefs of Staff, acquiesced to Senator Sessions, that they were also submitting to the International Organisations, namely, the U.N. and its derivatives.
And so, America’s authority is slowly and surely being erased also from the mind of her own citizens.
Original source