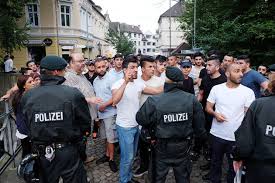 Official sources are being quoted via the Russian news agency TASS reporting an interview given by the chief of the federal authority on criminal affairs, BKA Jorg Ziercke to Die Welt, during which he shared that approximately 1,000 people in Germany which are supporters of the Islamic State.  He added that several hundred among them in the future may be capable to organise acts of terror in Germany itself.

According to Ziercke,  intelligence services had been watching closely 230 people, who may “organise illegal actions of big scale.”

Comparatively, back in 2010, people of the kind totalled about 120 in Germany.

Another 300 Islamists are of “major interest to BKA.” This group of potential terrorists “may offer logistics assistance in preparations for a terror attack,” Ziercke said.

“Most threat comes from fanatics, who are acting on their own, and from small groups,” the official said.  However, he said, German intelligence services are controlling the situation. No reasons for panic, he said.

Regardless of what German authorities can say, the fact is that Muslim demographics are overwhelming.  And that reality is already transparent in this photograph.