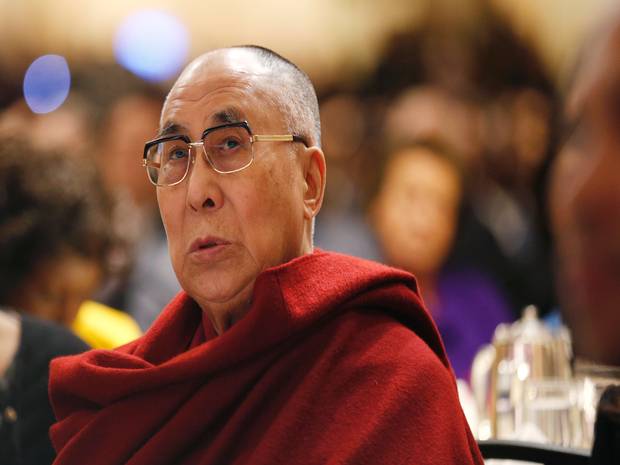 In his constant quest to assert the power of a dying America, President Barack Hussein Obama invited the Dalai Lama together with other guests at a breakfast meeting in D.C. with inter-faith leaders.  That said, China was as ever determined in ostracising the wise man: “Beijing said it opposed any country meeting with him under any circumstances.”

The president, obviously, did not miss the opportunity to raise the voice from his platform to indirectly defend Islam as he tried hard to denigrate the Islamic State as the true representative of all wishes and dreams and, above all, of all the commands to action explicitly spelled out in their holy Koran.

Obama continues his way to pacifying the terrorists and keeps promoting the violence of Islam in subtle but not so hidden ways for those of us who can read his words and gestures.

Therefore, when the president told the Dalai Lama that “Isis is a death cult,” who did he think he was talking to?

Regardless of his vision of life, the Dalai Lama is a wise man.

He would never on earth be tricked by the words of a con man who betrays the country he was elected to protect and to nurture.

Obama is like a little worm in front of the few sages of our times.  He would not be able to hold a candle to any of them.

America has gotten Obama used to get away with his utter treason.  But abroad, even his allies can see him for who he is.

A man who loathes his country and who is at the service of the invisible powers of globalisation, no more so invisible but ever so deceptive.

The American president which in his heart is not the first and in his actions he is not the second, is ever committed to the cause he has advocated from the early days of his mandates:  Islam and it’s world expansion.

Big question is:  Do Americans feel betrayed yet…?

Below with the article published by The Independent

Courtesy of The Independent:

President Barack Obama has denounced Isis as a “brutal, vicious death cult” that was involved in unspeakable acts of barbarism in the name of religion.

Speaking at an annual prayer breakfast meeting in Washington where the Dalai Lama was among the guests, the US leader said recent violence in places such as Iraq, Paris and Pakistan had revealed how faith and religious could be twisted to be used as a weapon.

He said Isis militants, who earlier this week sparked intense outrage  outrage by releasing a video showing a Jordanian pilot being burnt alive, were “terrorising religious minorities like the Yazidis, subjecting women to rape as a weapon of war and claiming the mantle of religious authority”.

At the breakfast in Washington, Mr Obama described the Dalai Lama as a “good friend” but he had declined to hold an official meeting with the Tibetan Buddhist leader as not to antagonise the authorities in Beijing.

The Chinese government has routinely denounced the 79-year-old and claimed he is trying to break up China. China often pressures foreign countries not to meet with him.

The Dalai Lama insists that he has for many years, campaigned for “meaningful autonomy” for Tibet, but not complete independence.

Mr Obama greeted the Dalai Lama with a bow and described him as a powerful example of “what it means to practice compassion and who inspires us to speak up for the freedom and dignity of all human beings”, the Associated Press reported. The religious leader sat in the front row along with Mr Obama’s senior adviser Valerie Jarrett.

The Dalai Lama was sat next to presidential advisor Valerie Jarrett –

The exchange may still rile China. After the breakfast event was announced, Beijing said it opposed any country meeting with him under any circumstances.

Before the event, an English-language commentary issued by the state-run Xinhua news agency, which while not a formal statement offers a reflection of Beijing’s thinking, warned against any encounter.

At the event, Mr Obama echoed some of the monk’s own teachings, calling for religious tolerance. “We see faith driving us to do right but we also see faith being twisted and distorted, used as a wedge or, worse, sometimes used as a weapon,” he said.

Campaigners for Tibet said they were pleased the Dalai Lama had been invited to the breakfast but despaired over Beijing’s comments.

“The attendance of His Holiness the Dalai Lama at the [breakfast] is indicative of his significance as a moral and religious leader to both the American government and the American people,” said Matteo Mecacci, President of the International Campaign for Tibet.