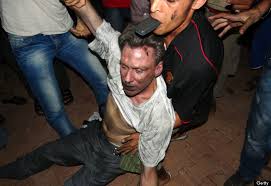 Representing America as an ambassador, used to be a prestigious position, with panache and a matching security retinue.  Then came the savage assault on Ambassador Christopher Stevens which Americans are too aware of. They knew and they know that Ambassador Stevens was butchered at the hands of Muslim barbarian terrorists.   And, it is precisely for the luxury of detailed information, that the reaction, or much rather the lack of reaction, by the American people is baffling.

I have repeatedly protested in many of my previous columns, how could the over 330 million Americans remain silent and indifferent, counting on a biased justice system and a corrupt anti-American government to find justice for their ambassador, the man who was supposed to represent the sacrosanct presence of their country?

Truth is that Benghazi has gone unpunished.

America keeps pulling hairs and finding emails and emphasizing the value of minor details when the fact is that the Obama Administration and in particular the president and his secretary of state behave in a treacherous way allowing Muslim barbaric terrorists to butcher the defenceless ambassador and the three former navy seals who were protecting him.

Their massacre unrolled during hours-long torture that has remained a testimony to the cruelty of Islam’s followers and the equal cruelty of an indifferent American people.

You tell me which one is worse.  I tell you my opinion:  The cruelty by our own is worse than any punishment.

Two and a half years after Benghazi, today news announce that Mark Lippert, the American Ambassador to South Korea has been attacked by a man and had to leave a lecture hall to check in, bleeding, at a hospital.

The North Korean regime did not lose a beat to comment that the attack was the “righteous punishment” for American “actions.”

North Korea hailed a South Korean man’s attack on the U.S. ambassador to Seoul in a statement through its Korean Central News Agency, saying the attack “reflects public opinion” in South Korea and is a “righteous punishment” against the United States.

The statement said the alleged assailant, Kim Ki-jong, 55, gave “a knife-attack shower of justice” to Mark Lippert, who police said was slashed on the face and wrist with a 10-inch fruit knife.

Lippert was seen with blood on his hand and holding his bleeding face, and medical officials said 80 stitches were needed to close the facial wound. Lippert was in stable condition after undergoing surgery, the U.S. Embassy said.

The assailant shouted, “No to war training” before attacking Lippert, the Yonhap news agency reported. The man was reportedly later tackled and arrested.

The suspect’s reported comments touch on a deep political divide in South Korea over the still-fresh legacy of the 1950-53 Korean War, which is still technically ongoing because it ended in an armistice, not a peace treaty. Some South Koreans blame the presence of 28,500 U.S. troops stationed in the South as a deterrent to the North for the continuing split of the Korean Peninsula along the world’s most heavily armed border – a view North Korea’s propaganda machine regularly pushes in state media.

The U.S. State Department condemned the attack, which happened at a performing arts center in downtown Seoul as the ambassador was preparing for a lecture about prospects for peace on the divided Korean Peninsula.

In a televised briefing, Chung Nam-sik of the Severance Hospital said the knife penetrated through Lippert’s left arm and damaged the nerves connected to his pinkie and tendons connected to his thumb. Lippert will need to be treated at the hospital for the next three or four days and might experience sensory problems in his left hand for several months, Chung said.

President Obama called Lippert to tell him “he and his wife Robyn are in his thoughts and prayers, and to wish him the very best for a speedy recovery,” according to National Security Council spokeswoman Bernadette Meehan.

Lippert previously held positions at the Department of Defense from May 2012 until September 2014, according to the embassy website.

The Associated Press contributed to this report.

Becoming an ambassador in yesteryears, was a most coveted honour given by presidents to their most generous donor buddies, like President John F. Kennedy appointees, some of which appear on the photograph

And although a democrat, Kennedy was a proud American president, with an impeccable pedigree.  I know many will argue about their flaws, his, his father’s, his family’s flaws.  True.  Undoubtedly.  But their essence, and his, was that they had pride as American representatives of their country and showed it to the world.

In any event, it seems that the purported U.S. interference in Korean affairs has been the main grievance of the Ambassador Mark Leippert’s assailant.

Now what?  How will President Barack Hussein Obama react?

Most importantly, how will the American people respond to this attack on their country and them?

After one ambassador slaughtered in Benghazi now this one, recently appointed to South Korea and now with 80 stitches in his face, a reminder of the high risk element of the job, one that could become a major deterrent to future potential candidates.