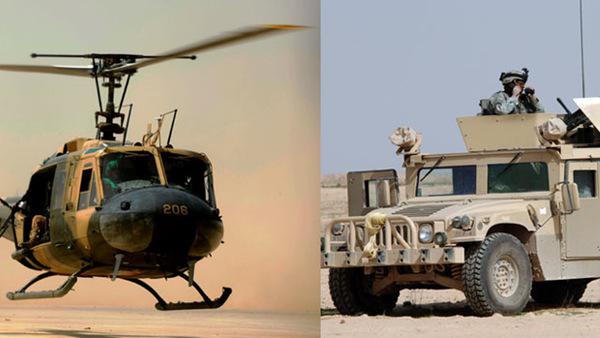 ELIANA BENADOR: “LOSING TRACK” OF $500 MILLION WORTH WEAPONS IN YEMEN?

This administration is insulting our intelligence by simply announcing that they “lost track” of $500 million in military equipment in Yemen.

Their abuse is unconceivable.  Only little kids could believe them and that is why it is so vexing.

Not only they left in rush Yemen, as thieves behaving like cowards and ordering by the same token that the American military stationed there destroy their personal weapons, by which I am not meaning their personal property, but the weapons they were used to handle and care for.   But, what can a man who never did his military service, let alone is such an unpatriotic treacherous president, understand of the unique relationship and dependence the military have to their weapons.

Although I am a woman and have never done the military service, I can see and understand the importance that one’s own machine gun has for each soldier.  So I find it simply disgusting that anyone give such orders, not the president, the undeservingly called commander-in-chief, or a general or anyone else.  Such orders should be the reason for a military uproar or more, wouldn’t they?  Now, what do I know, but my boiling blood tells me to feel like that when I think of it and, worse, when I write about it.

So, after a month that they made the American troops and embassy personnel flee, now these are the good news.

But, HOW can $500 million in military equipment vanish?  Of course they cannot vanish or disappear or simply go unaccounted for.  It is not about incompetence.

That was a gift that the American Administration has left for their friends the Yemenite government from the former President Saleh.

The U.S. officials told the newspaper that, however, they fear the “small arms, ammunition, night-vision goggles, patrol boats, vehicles and other supplies” my have slipped in the hands of the Iranian-backed terrorists or the al-Qaida ones.

In fact, it appears that those were the military equipment Washington has supplied for more than $500 million in military aid to Yemen since 2007 under an array of Defence Department and State Department programs.

Besides that, the Pentagon and CIA are reported to have provided additional assistance through classified programs, making it difficult to know exactly how much Yemen has received in total.

Now all that seems to have gone out of sight.

While the U.S. Embassy in the capital was closed last month, a handful of U.S. military advisers have remained in the southern part of the country at Yemeni bases controlled by commanders that are friendly to the United States.

So, the loss was not that much of a loss, as the current Administration had actually gifted those $500 million military equipment to the “friends” of the United Nations.  Excuse me, I meant to say the United States.

“In recent weeks, members of Congress have held closed-door meetings with U.S. military officials to press for an accounting of the arms and equipment. Pentagon officials have said that they have little information to go on and that there is little they can do at this point to prevent the weapons and gear from falling into the wrong hands.”

“We have to assume it’s completely compromised and gone,” an unnamed legislative aide on Capitol Hill told The Washington Post.

According to the newspaper, this is what is presumed missing:

A Pentagon spokesman declined to comment on the record about the newspaper’s report.

In January, Yemen’s government and its U.S.-backed president, Abed Rabbo Mansour Hadi, were toppled by the Iran-backed Shiite Houthi rebels, who seized control of northern Yemeni military bases. In February, a military base in southern Yemen was overrun by militants linked to al-Qaida.

“Yemen is collapsing before our eyes,” U.N. Secretary-General Ban Ki-moon warned during a February briefing. “We cannot stand by and watch.”

The U.S. Department of Defense had already halted shipments of $125 million in military hardware — “including unarmed ScanEagle drones, other types of aircraft and jeeps” — scheduled for delivery to Yemen this year, The Washington Post reported.

During the evacuation of the Sanaa embassy, U.S. Marines were ordered to destroy their weapons and depart the country unarmed — a move that sparked backlash among some who argued that service members are taught never to leave their weapons behind.

On Tuesday, Marine Corps Commandant Gen. Joseph Dunford testified on Capitol Hill, saying the decision was backed by the U.S. Central Command as well the Department of Defense in Washington.

Minnesota Republican Rep. John Kline fired back: “It is an intolerable position for people in uniform to be in a very dangerous situation and have to trust those who put us in that situation while we turn over all weapons.”

Meanwhile, The Associated Press reported that Houthi rebels seized “more than 25 official U.S. vehicles in the wake of the hasty departure of embassy staff.”