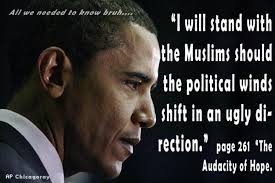 In the aftermath of the Islamic State claiming responsibility for the attack in Garland, Texas, they sent a “message to the crusaders” via the Twitter account of their terrorist Abu Ibrahim Al Ameriki.

It is known that Twitter, just as Facebook, are becoming co-conspirators allying with the forces of evil.

The gist of the message sent via Al Ameriki, is that Islamic State barbarians are threatening to attack innocent American civilians in at least five states — California, Virginia, Maryland, Illinois and Michigan.

Now, which American leader has stood up to tell them “no way?”

Which of your favourite candidates has said “ENOUGH?”

Who has raised their voice loud and clear to say we, Americans, people from Western civilisation, categorically do NOT accept and will not tolerate you, beasts, addressing us like that.

In fact, sharia has already began to sink in the hearts and minds of Americans who are getting used to be mistreated, or accept to be humiliated.

America, the superpower in the world until not too many years ago, deserves to be torn from the hands of evil.

Yesterday the savages, the barbarians from the Islamic State had the audacity to make public such an incredible threat against the safety of Americans.

Reminiscent to their 72 virgins, the Islamic State terrorists have announced that 71 “trained soldiers” have already been trained in the United States and they claim 23 have signed up for “missions like Sunday” — when two gunman clad in body armour fired assault rifles at an anti-Muslim event before police officers shot them dead.

In traditional terms of threats against nations, this would have been considered a declaration of war, with the disparaging reality that this is part of a new, modern and unconventional way of making war:

It is called asymmetrical war .

In this asymmetrical war, the enemy is invisible, he is not seen until the last second or not at all.

In America, the so-called president and commander-in-treason, unabashedly sides with the enemy of the American people.

It is time for the American people to face both enemies.

The enemy within who is making common cause with the enemy without, targeting innocent civilians.

By betraying the mission he received when he was elected, President Obama is unworthy of being a tenant at Pennsylvania Avenue 1600.

“To our brothers and sisters fighting for the Sake of Allah, we make dua for you and ask Allah to guide your bullets, terrify your enemies, and establish you in the Land. As our noble brother in the Philippines said in his bayah, ‘This is the Golden Era, everyone who believes… is running for Shaheed.’

“The attack by the Islamic State in America is only the beginning of our efforts to establish a wiliyah in the heart of our enemy. Our aim was the khanzeer Pamela Geller and to show her that we don’t care what land she hides in or what sky shields her; we will send all our Lions to achieve her slaughter. This will heal the hearts of our brothers and disperse the ones behind her. To those who protect her: this will be your only warning of housing this woman and her circus show. Everyone who houses her events, gives her a platform to spill her filth are legitimate targets. We have been watching closely who was present at this event and the shooter of our brothers. We knew that the target was protected. Our intention was to show how easy we give our lives for the Sake of Allah.

“We have 71 trained soldiers in 15 different states ready at our word to attack any target we desire. Out of the 71 trained soldiers 23 have signed up for missions like Sunday, We are increasing in number bithnillah. Of the 15 states, 5 we will name… Virginia, Maryland, Illinois, California, and Michigan. The disbelievers who shot our brothers think that you killed someone untrained, nay, they gave you their bodies in plain view because we were watching.

“The next six months will be interesting, To our Amir Al Mu’mineen make dua for us and continue your reign, May Allah enoble your face.

“May Allah send His peace and blessings upon our Prophet Muhummad and all those who follow until the last Day.”     – Abu Ibrahim Al Ameriki

Geller has shared that neither the FBI nor Homeland Security have responded to her quest for protection against this terrorist threat.  Utterly revolting.

And yet, traitors as Nidal Malik Hassan and Bowe Bergdahl have been treated with all the leniency in the world, with pay and protection.

Had President Obama been the CEO of a corporation and had he handled their business in the manner he has been doing with America’s interests, do you think he would still be using their jet to go vacationing with family and friends alike, at the expenses of their stockholders and board members?

Could anyone give a good reason why are Americans putting up with Obama’s treason?

Meanwhile, the hordes have now given an advance notice for the next 6-months.

They are not joking.  They are dead serious.

Handicapped with a traitor president, what will the American people do, wait until the first victim’s head will roll down?

Therefore, given that the president is incapacitated to speak up and defend Americans, it is time to find some other courageous leader who will speak up on behalf of the American people.  Now.

Islamic State must receive a forceful response from a fully testosteroned American leader.

Do not make them wait because they are on their way.