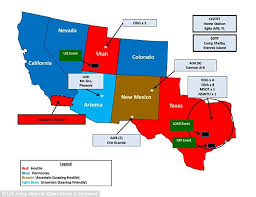 ELIANA BENADOR: WILL JADE HELM REMAIN ONLY A CONSPIRACY THEORY?

Ever since the beginning of my professional life in politics, terrorism and counter-terrorism, and especially since the inception of my outfit Benador Associates on the eve of Sept.11, 2001, we have tried to stay away from conspiracy theories.

That was the hard part, because being close to legitimate Iraqi sources it was difficult to stay away from the truth.

Many have accused President George W. Bush to rush into war to liberate Iraq.

We had the privilege to have first hand information coming from Iraqi exiles of the best caliber.

The information they shared concerned among others, the existence of Al Qaeda training camps which were operational in Iraq during many years of tyranny under Saddam Hussein.

At first, the world did not want to believe because it was an inconvenient truth.

In recent years, public opinion had to surrender to the evidence that those camps had, indeed, existed.

Similarly, now, we are in front of worrisome information regarding a military training to happen within some months in a few regions of the American territory.

According to the U.S. Army website, Jade Helm is a multi-state training exercise taking place July 15 through Sept. 15 with members of U.S. Army Special Operations Command and service members from the military’s four branches.

While the exercise is taking place across seven states, the Special Operations Forces are only training in five states: Texas, Arizona, New Mexico, Utah and Colorado.

Texas and Utah have been labeled “hostile” territory in documents related to the exercise.

Colorado will not be involved in the upcoming Jade Helm 15 military exercise planned in six other states.

U.S. Army Special Operations Command announced earlier that it will train with other U.S Armed Forces.

As expected, this has set off a firestorm of concern among Americans, that it is a “false flag” training exercise for an operation to declare martial law in the U.S. in 2016.

Special Operation Command has explained that it “periodically conducts training exercises such as [Jade Helm] to practice core special warfare tasks, which help protect the nation against foreign enemies.

According to them, “It is imperative that Special Operations Soldiers receive the best training, equipment and resources possible.”

“While multi-state training exercises such as these are not unique to the military, the size and scope of Jade Helm sets this one apart. To stay ahead of the environmental challenges faced overseas, Jade Helm will take place across [six]states. However, Army Special Operations Forces (ARSOF) will only train in [four] states: Texas, Arizona, New Mexico and Utah.”

On a purported Jade Helm 15 map that has circulated on the Internet, Texas and Utah are listed as “hostile,” along with a small section of Southern California, along the border with Mexico.

The Army has announced that the exercises would take place between 11 p.m. and 5 a.m.

However, despite all the cover of legitimacy, the people’s  concern about it is also legitimate.

Even the foreign press is considering this administration’s move as utterly unusual, with headlines as “Jade Helm: How the U.S. Administration infiltrates the population.”

Now, presidential candidate, Senator Ted Cruz is also demanding answers from the powers that be, namely the Department of Defence.

Granted, others like Rand Paul and Rick Perry don’t seem to give it another thought.

But a question comes to mind.

Why is the official slogan of Operation Jade Helm 15 “Master the Human Domain?”

This is just one of many intriguing oddities that surround the eight-week long Pentagon-forces training that is fomenting anger and suspicion in Bastrop County and other rural parts of Texas where Jade Helm is due to be take place.

When one looks at the bile-green text of its logo, a threatening phrase is placed beneath the operation’s logo of a double-edged sword, two crossed arrows and a translucent wooden clog.  A clog indeed.

Not surprisingly, therefore, conspiracy theories have arisen that the Army Special Operations Command is planning a martial law takeover of Texas come July.

On the safe side, the Governor of Texas is going to deploy the state guard to stave off any potential Obama takeover.

“It is important that Texans know their safety, constitutional rights, private property rights and civil liberties will not be infringed,” Governor Abbott of Texas said in an April 28 letter to Major Gen. Gerald “Jake” Betty, commander of the guard.

Thus,  Governor Abbott has ordered the guard to “monitor” the eight week-long exercise.

In Texas, Utah and New Mexico most of the training will take place on private land.

Meanwhile, in Arizona, Florida, Louisiana and Mississippi, much of it will take place on military installations.

That said, one can legitimately wonder why precisely those states?

Why did they not choose Michigan?  Or Baltimore? Or even Washington, D.C.?

To put our worries to rest, the sacrosanct Pentagon is denying any “takeover” of Texas by the Obama regime.  How reassuring.

Nonetheless, the presence of the Islamic State in Texas was felt last week at the freedom of speech event hosted in Garland.

A massacre was avoided by a courageous 60-year-old police officer who was present and who drew his hand gun and neutralised them, killing one and the other was wounded.

In the aftermath of the Garland attack, counterterrorism experts have given the bleak news that there are hundreds if not thousands of terrorists like those two, who are as ready as them to commit more massacres.

Back to Jade Helm.  In all, 1,200 highly trained American special ops will be deployed for the “Master the Human Domain” Pentagon project.

Soldiers will operate in and around towns in Texas, New Mexico, Arizona, California, Nevada, and Utah.

Some of them will be dropped in by planes, carrying weapons loaded with blanks in what military officials have dubbed Realistic Military Training.

Seen from my angle, this level of “realism” seems designed as a psychological threat to scare civilians, rather than to train any particular skill-set.

Those special operatives have pledged allegiance to flag, country, constitution.

In case they would receive orders to act against the American population, what would they do?

My readers will surely agree that the Obama Administration is never going to try to scare the boys of the Islamic State.

And it is precisely the Islamic State that has announced plots against the U.S., although at first sight on a much smaller scale than Americans are used to.

When one thinks of terrorist jihadi attacks against America, our collective memory is impregnated with the infamous mass attack par excellence from Sept. 11, carried out by al-Qaeda.

The difference being the gruesomeness of the Islamic State to commit their atrocities.  Al-Qaeda’s atrocities somehow pale in comparison.

Whether Al Qaeda or the Islamic State, let us face it, they are one and the same.   The latter being a more degenerated devolution from the first one.

There is much to find out on both, Jade Helm and the Islamic State threats.

But the mainstream media, more and more behaving as state media, are keen in minimising suspicions so as not to offend the Muslim terrorists and Islam, their religious-ideological-political apparatus that has set for them their modus operandi.

Or is it to facilitate the terrorists surreptitious activities?

So, yes, maybe these are worries and conclusions that are a bit far-fetched, but reality is proving to be much more brutal than any conspiracy theory we could ever advance.

Our only concern is to try to protect innocent civilians from a rogue president and his administration as well as from a treacherous congress.

They all are part of the enemy within.

The brave people of Bastrop County in Texas got it right.

Dissent is not conspiracy.