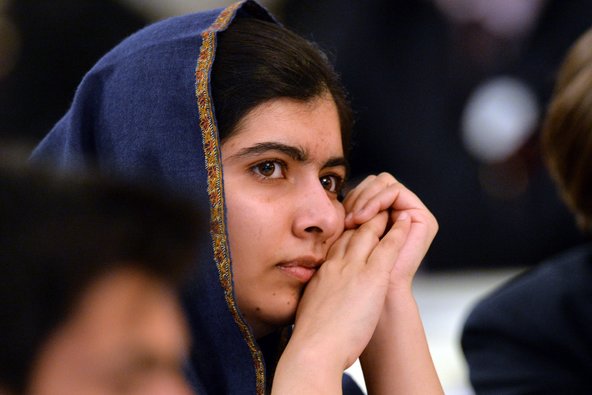 Most may remember October 9, 2012,  when the Taliban attempted to kill a young Muslima Malala Yousafza in Pakistan with a bullet to the head because she spoke out about life under Taliban occupation.

She also had written anonymous blogs at the BBC and was even interviewed by the New York Times.

After a long period of treatment and convalescence, Malala survived.

She became the youngest person to win the Nobel Peace prize…  for being attacked by Taliban terrorists and for having survived.

Actually, just as someone else before her, who was awarded the Nobel Peace prize for being black and becoming a president because of the colour of his skin, in his own country.

And, just as her, he had no achievement to report.

She has become an advocate of education for women and girls.

Speaking of Muslim terrorism, she says:

“There are these terrorist attacks happening, for example what happened in Paris or what happened in Peshawar a year ago,” continued Malala. “It’s not just needed in Pakistan but across the world. If we want to end terrorism, we need to bring quality education so we defeat the mindset of terrorism mentality and of hatred.”

As a good globalist and enlisted feminist by the United Nations and Unesco, she has spoken against the frontrunner presidential candidate, Donald J. Trump.

She is unhappy that Trump called for a ban on Muslims over a week ago.   In her own words:

“Well that’s really tragic that you hear these comments which are full of hatred, full of this ideology of being discriminative towards others,” she said.

On December 7, the leading candidate suggested “a total and complete shutdown of Muslims entering the United States until our country’s representatives can figure out what is going on.” The demands came after a Muslim couple with ties to radical Islam murdered 14 people in San Bernardino, CA.

Malala also said his behavior might “radicalise more terrorists” and asked politicians to have “more caution.”

“If your intention is to stop terrorism, do not try to blame the whole population of Muslims for it because it cannot stop terrorists,” she said.

Alas, Malala is misguided.  In her tender youth she has been metaphorically speaking, deceitfully abducted by the globalist powers and she is at present a feminist voice of the global establishment.

Later on, she argues that:

“There are these terrorist attacks happening, for example what happened in Paris or what happened in Peshawar a year ago,” continued Malala. “It’s not just needed in Pakistan but across the world. If we want to end terrorism, we need to bring quality education so we defeat the mindset of terrorism mentality and of hatred.”

An ignorant kid, intellectually kidnap by the left, has the audacity to meddle in the internal affaires of a far away nation where she has no voice and no vote.

Yet, New York Times and CNN are taking advantage of her miserable voice to keep ranting against the most patriotic of all the candidates from the Republican establishment.

So, Malala Yousafzai, how about reading this:

(1)  There is no time for  “quality education” when your Muslim terrorists are busy massacring people.

(2)  Trump is full of LOVE for his compatriots.  He loves the American people and therefore he wants to have all of us safe.

WE DO NOT SEE ANYTHING WRONG WITH IT.

(3)  You have no voice and no vote in our elections so why don’t you focus on your foundation and maybe learn how bad globalism  is and how bad feminism is and how it is an attack on happy families.

(4)  As a Muslim woman (though immature) you should rather try to stay home and educate your children so they not be brainwashed in the demands of your Koran to kill infidels and conquer the West.

(5)  Please raise your voice and go vote if you allowed as a woman, in your country, Pakistan.

(6)  No one ask you for your opinion because you would not know what you are talking about, which you showed in the best possible way.