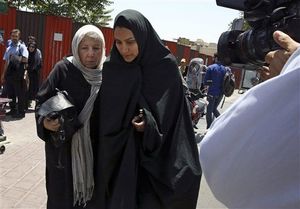 Choreographed with impeccable precision, in an obviously carefully orchestrated operation, we have some recent Iran-related events that have happened within the last 120 hours.

Just some hours ago, breaking news announced  that Iran was releasing 4 Iranian-American journalists captured at different points, already some time ago.

Note that the Obama unofficial media, mainstream media refers to them as Americans only, not many mention their dual citizenship.  After all, Iran was also their country, right?

Their names are: Jason Rezaian, Amir Hekmat, Saeed Abedini and Nosratollah Khosrawi Roudsari and have been in Iran’s jail on various charges.

Initially, English Farsi News announced it was only the above mentioned four.

An interesting information though on one of the freed journalists, who happened to be the Washington Post correspondent, Jason Rezaian.

In my view, the man has been in training and you will see why I venture to say so.

Rezaian is married to Yeganeh Salehi, a correspondent for the United Arab Emirates-based newspaper, the National.  She was also arrested at the same time with her husband, but she and two others were released later.  This is she:

This is she as well, as you can see her in what appears to be a more recent photograph:

The UAE is a very particular country.  Within a few miles you find spread seven tiny Emirates.  The Emirate of Dubai is their modern face for the outer world, a sort of Muslim New York if you will.

Abu Dhabi is where the ruler of the UAD has his residence.  It is the formal Arab/Muslim emirate.  And Sharjah, which is the fundamentalist Muslim emirate.  Plus four other emirates.  All of them apply sharia law.  No question asked of course.

As a side note, know that the elite leadership of the Gulf countries,  whether it is Saudi, Oman, Bahrain, Qater, Emirates, are keen in avoiding Iran’s wrath and any nuclear mistakes, because of the geographic proximity.

Likewise, know that the United States has given these royals, visas which are automatically renewed on a 10-yearly basis.

So, one way or the other, their elites, some of them, pockets behind Muslim terrorism, will be safe.

Back to the four Iranian journalists, they are Iranian-Americans with Iranian names.  So, I venture to say, we don’t know who are we rescuing anymore.  Do you see my point?

Besides, there is a fifth American that has been released, his name is NOT Iranian:  Mathew Trevithick.

Associated Press and Reuters, are keen in mentioning that unrelated to the swap, Mr. Trevithick,  fifth American who had been detained in Iran, was also released on Saturday

Would you think the double nationals are coming as enemies of the Iranian regime?

Or more like high ranking Iranian government operatives of course?

Initially the famous “swap” was going to be about  these 4 -and the extraofficial 5th journalist, Mr. Trethick, FOR SIX imprisoned Iranians.

However, as per the the swap deal, the US has “also” freed 7 Iranian-Americans who were held for sanctions-related charges AND demanded the Interpol to stop prosecution of 14 other Iranian nationals.

Both lists are as follows.  First the seven inmates who have been freed from Iranian jails.

And the other 14 Iranians who were accused in the United States of sanctions violations and had charges dropped on Saturday under the prisoner deal are:

Always remember that this has been surprisingly added as a part of the famous Vienna Deal.

That said, we would be remiss to forget the timeliness of serendipity, arranging for our ten sailors to be lost in Iranian waters on Tuesday of all days, and how Obama did not even mention the fact during his, hopefully, last State of the Union.

You may remember from my previous article, Secretary of Defence Ashton Carter had a slip up and entrusted that the Obama Administration shared with the Iranian government that the sailors were astray.

As Rep. Louie Gohmert exasperated commented:  “You call your helicopters, you send your own American team to rescue them.  You don’t call the Iranians!”   Indeed.

So we would be wise to wonder and demand to all involved that one and ALL parts of the Vienna Deal be disclosed for full consumption by the American people, as it is ordered by the Constitution and as it should be regular procedure.

For, naturally we can ask ourselves, what else is down there in hiding.

Alas, breaking news at this precise instant announce that: ” “Iran complies with the nuclear deal; therefore, sanctions are lifted. “

“International inspectors confirmed Saturday that Iran had dismantled large sections of its nuclear program, as agreed in a historic accord last summer, paving the way for the lifting of oil and financial sanctions by the United States and other world powers.”

A sad day for America and the world.

This is why Obama ignored at the State of the Union, that Iran had captured 10 American sailors.  They were the bait and the ransom for the entire swap.  So we cannot complain.

One thing is sure.

Since the first day Obama took power, he  unilaterally switched his agenda.

It went from Pro-American to Pro-Islam.

It has been thanks to business mogul Donald Trump, who stirred the topic about the Iranian-American “prisoners,”

As usual, Donald Trump got this part to be added.

That said, and as you can see, the “prisoners” seem in quite a good shape, don’t they?

Donald Trump has not yet been elected but Americans already owe him a debt of gratitude.

That said, the process needs to be accelerated and Obama’s rule should, if possible be interrupted.

So we have some questions for the Democrats:

When you gave Obama the presidency, was it because you wanted America to be destroyed, her borders erased, jobs outsourced, and so on?

Are you happy with the results?

Is your life better under Obama?

And to those who did not vote for him:

You are doing nothing to remove him.

I understand it is a question mark.

What is not a question mark, however, is that America’s existence is in jeopardy and I cannot guarantee how much life is there for this agonising, drowning Titanic.

In part yes.  The policies of the right have not been good enough.  The corruption among the republican party knows no borders.

But We The People have the Power.

Vets.  Bikers.  NRA.  Etcetera need to unite and dare to do the one thing that needs to be done.   Peacefully.

Be inspired by the ignorant Muslims, of all people, in Tahrir Square.  If they got regime change peacefully, so can we.   So help us G-d.

Then we need immediate elections.

May G-d bless you all.

May He give you the strength to do what is right.