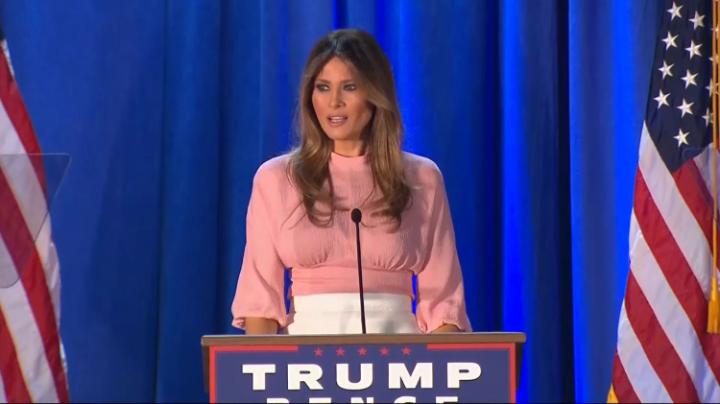 The world knows Donald J. Trump and his exquisite taste for the best in everything and, above all, everyone in his life.

He has amazing, brilliant and loving children, all of them.

Yesterday, it was his devoted wife Melania Trump’s turn to be in the limelight.

Comes to mind an anecdote Melania has told on several occasions to reporters.  When her husband told her he wanted to run for President of the United States, she answered, “You know you will win.”

As she entered the venue of her speech in Pennsylvania, Melania Trump, modestly dressed in a soft salmon top and a demure white skirt, walked to the podium at the sound of America’s national anthem and a cheering crowd.

Melania, the Slovenian-born model, and entrepreneur who after many years and successive visas that preceded her green card, succeeded in becoming a citizen of the United States of America.

Donald J. Trump on board Air Trump One, flying to a rally in North Carolina “Watching my beautiful wife, Melania, speak about our love of country and family. We will make you all very proud.”

She explained how  it was back then:  “I loved my work, and as a young entrepreneur, I wanted to follow my dreams to a place where freedom and opportunity were in abundance. So, of course, I came here.  Living and working in America was a true blessing. But I wanted something more. I wanted to BE an American.

After a 10-year process, which included many visas and a green card, in 2006, I studied for the tests and became a US citizen. This is the greatest privilege in the world.”

And she explained to the crowd, “I am an immigrant. And let me tell you…no one values the freedom and opportunity of America more than me, both as an independent woman and as someone who emigrated to America.”

She also explained her audience how her husband  Donald traveled the country and quoted some simple but critical questions he has asked:

“What kind of a country do we want?

Do we want a country that is safe, with secure borders?

Do we want a country where every American gets a fair shot?

Do we want a country that honors our Constitution?

Do we want a country that honors life, liberty and the pursuit of happiness?

Do we want a country that respects women and provides them with equal opportunity?

Do we want a country where every child has access to a good education?

Do we want our children to be safe and secure and dream big dreams?

Do we want a president who is beholden to know one but you, the American people?

Do we want a president who is a fighter for us and will never give up?

Then we want Donald Trump to be our President.”

She then proceded to explain the kind of First Lady she would be, her priorities

“It will be my honor and privilege to serve this country.

I will be an advocate for women, and for children. Let me tell you a little more about what that means to me.”

It was a great moment to witness and unavoidable to compare her to her husband’s contender, a woman.

That American-born woman has already successively been a First Lady then a senator, then Secretary of State, and now she is applying for the job as President of the United States.

The female candidate’s goal is to completely open the borders of America on the north and the south.

She also has the ambition to decree totally open immigration, turning America into a territory that would be free for all to grab.

Already with those two points in her agenda, we can feel how America would cease to exist.

Thus the comparison to Melania Trump could not be more flagrant.

The Slovenian-born American patriot spoke of a safe America, of the love of country, and of American values.

An intelligent speech, giving the American people the opportunity to  have some quality time with their next First Lady.

With this speech, Melania Trump has helped bring Donald Trump closer to the hearts of the American people at large.

Now, even Democrats can compare what a good woman and a devoted, loving patriotic First Lady looks like.

That comparison is going to be critical to the coming presidential election.

Choosing a great President who brings along a wife and family with those American values Mrs. Trump spoke about in her speech, is an asset and the majority of Americans will be honored to call them our President, First Lady, and the First Family.

In all, ever since Donald J. Trump announced his candidacy, the rise of America has begun.

Most have not noticed it, but each day has been a day turning the light on the positive and a quest for goodness to give and alleviate the suffering of the American people.

Melania and Donald Trump will love this country as no other presidential couple has ever done before them.

They will be the best role models that we could leave as the legacy for our children, grandchildren and next generations of Americans to come.