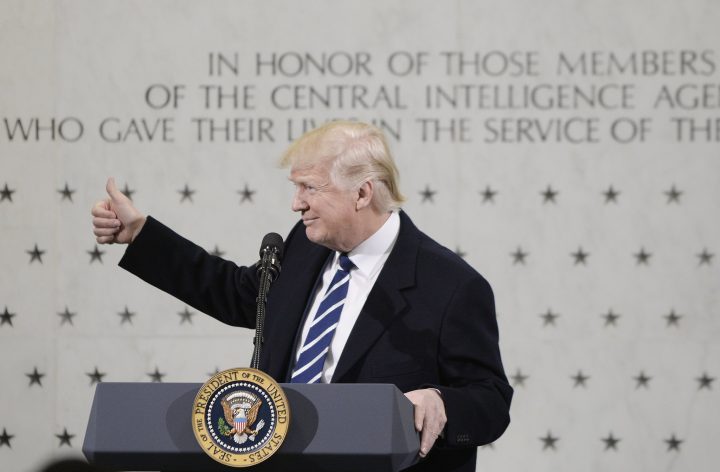 President Trump and the CIA appeared to be a relation on the rocks last week in the wake of key revelations from Wikileaks’ release of the CIA hacking tools.

In the aftermath  and despite calls by the outraged people for the President to disband the CIA, we learn today that Mr. Trump has secretly given the CIA “new authority to conduct drone attacks against suspected militants, the Wall Street Journal reported on Monday, citing U.S. officials.”

President Trump visiting the CIA few days after his Inauguration.

In doing so, the President signals two key elements:

(1)  His willingness to adopt the CIA as it is.  This is the action and reaction of a true President.

Thus, the President conveys his willingness to make things work with the Agency, and the American people has to appreciate how in doing so their Commander-in-Chief is thinking first of maintaining a homogeneous functioning Administration.

Think about what a nightmare and a mess it would have been if the President had hastened in disbanding the CIA.

Instead, he’s giving them an important job to take care of.  Trump is adopting the CIA and they will learn to respect him and search his counsel, as the future will demonstrate.

So far, to the knowledge of this writer, President Trump has not made any comment on the Vault7 leak and that is indicative of how much the President is controlling each of his words, each of his reactions, for the good of the American people.

This is History in the making.

(2)  At the same time, Trump is making a significant departure from his predecessor who counted exclusively on the Department of Defense to carry on drone attacks on sensitive targets.

As such and, again, despite the devastating news contained in Vault7,  the President with his disarming move is placing his trust on the CIA to execute drone attacks on specific terrorist targets.

The United States was the first to use unmanned aircraft fitted with missiles to kill terror suspects in the years after the September 11 massacre perpetrated by Muslim terrorists.

The White House, the U.S. Department of Defense and the CIA have not yet responded to requests for comment on this news.

President Trump’s secret but bold move to give the CIA authority to drone terrorists shows his determination to get the culprits wherever they may be and by all the means at his disposal.