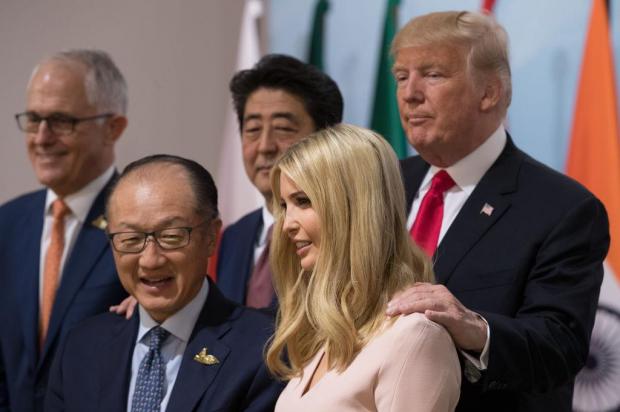 One thing is sure, Dad Trump, the master negotiator, seems able to control almost as much as the 3-D amateur chess players give him credit.

If you remember, on November 9, 2016, once Donald J. Trump was officially confirmed as President-Elect of the United States of America, reportedly his first reaction was to inquire if his adult children could have clearance.

On the one side, it was understandable, as Dad Trump, the now former real estate mogul, had been almost umbilically connected to his adult offspring while he developed his vast business empire.

Until then, they had been his confidants, his trustworthy alter ego with whom he felt like a fish in his pond.

President Trump and his daughter and advisor Ivanka Trump, at the G-20 Summit in Hamburg, Germany

The positive result of his election with his new Presidential status shook the essence of their lives.

Dad Trump was not ready to give up on his children.  One can imagine his lawyers had the task to find loopholes in the law that would allow him to take them along in this new stage of his life.

As a result of his known perseverance, Dad Trump succeeded making his first family appointment with Jared Kushner, his son-in-law whose different family name also made it easier.

But, appointing Kushner was just the tip of the iceberg.

Rumors run that his children were concerned about Trump’s nationalistic stances which could stamp a stigma on their brand.

Following-up in that nationalistic direction, Trump would have undoubtedly impacted negatively on the family businesses worldwide.

Something had to give.

Ivanka from the campaign to the White House

His daughter’s presence was a constant feature in the campaign.

Her favorite quote, “My father, will never let you down,” was most effective, especially spoken by the blonde angelic female whose testimony backed the assurances that Trump was a women-empowering force to be reckoned with.

Except that she should have told Americans: “My father will never let me down.”

She and her husband boldly left their New York City life and moved their entire family to a D.C. more politically adequate environment.

Then, on March 29, 2017, Ivanka Marie Trump was appointed Advisor to the President of the United States of America.

Right, in the past, other children or siblings have worked with their presidential relatives, Bobby Kennedy, Alice Roosevelt, John Eisenhower, come to mind.

However, they had a common denominator as most of them shared the same political views of the fathers.

Unlike them, Ivanka as her husband Jared, are the standard bearers of globalism within an Administration supposedly nationalistic as candidate Trump had promised the voters rally after rally.

Now, that same man has chosen as his advisor, his most trusted child, the “independent” globalist whose key issue in political advocacy carries the flame of globalism.

Influence on the President

The daughter’s influence, as well as his son-in-law’s, are imprinted in the President’s decisions that began the day of his investiture.

Globalist appointments to his cabinet unsettled the Trump base.

Meanwhile, the President argued in the lines that billionaires in government would be the best to make the nation wealthy again.

But I disagree with that premise.

It is like setting the foxes to guard the henhouse, isn’t it?

During his glorious second foreign trip, it was easy to visualize the mastery with which President Trump moves the pieces on his chessboard.

He keeps his wife busy with some First Ladyship chores.

He keeps the American public satisfied with some candy here and there and some crumbs over there, represented by campaign promises kept.  Or so.

President Trump gave a historic speech, with which he took the crowd’s hearts.

At no point during that speech was any mention of nationalism or patriotism.

Nonetheless, Trump included this remark undoubtedly added by his globalist team:  “We are working with Poland in response to Russia’s actions and destabilizing behavior. And we are grateful for the example Poland has set … by being one of the few nations that meet its (NATO’s) financial obligations.”

Instead of asking for NATO to be dissolved and create a new ad hoc non-globalist organization to fulfill contemporary military needs, he accused the only stabilizing country, Russia, of being destabilizing.

Trump at the G-20 in Hamburg

At this globalist gathering, Trump played the part when he alone and staunchly rejected once again the Paris climate accord, one of his campaign promises.

But, as usual with Dad Trump, the chief negotiator, he gives a few carrots then, subtly, he takes your garden away.

In this case, he took his reward when he interrupted his G-20 speech no less, to honor his daughter Ivanka Trump, a champion, as he put it.

Indeed, the globalist notion of “empowering women” is, as he put it, is “a core value that binds us together.”

In his thank you message Dad Trump was explicit, Ivanka has been helping the Chancellor.   Chancellor Angela Merkel, that is.

So, Ivanka Trump has been helping Merkel, the woman who leads the globalist EU and has allowed in Germany over one million migrants from Syria but also from Africa and other countries?

Watch that video to the end, please.  You will see the brave and patriotic candidate to president, Donald J. Trump before his metamorphosis into President Trump.

Then, Dad Trump gave away some serious statement on his daughter:  “If she weren’t my daughter it would be much easier for her.  It might be the only bad thing she has going, if you want to know the truth….”   Really?

Ms. Trump and her Dad Trump are working together, and the left sees that with jealousy and envy.   They realize they missed the chance to have a Clinton dynasty.

Understandably, some within the Trump base look at this father-daughter alliance reluctantly.  It is out of concern for America and the interests of the American people.

Had Ms. Trump been a staunch nationalist, Dad Trump supporters would have adopted her unhesitatingly.

Had she been a devoted patriot whose interests would have begin seeking ways to stop Planned Parenthood from murdering more American babies, beyond the 50 million American children that have already been aborted during the last decades, Trump devotees would have applauded her.

Or had she rather advocated my idea to establish a salary for working-at-home-moms, wouldn’t that have been a way to sway the country towards true conservatism?

Or else she could have defended the American family from the assault by LGBTQ proponents, something that this country needs desperately.

But as a globalist, she promotes women entrepreneurs.

Sadly, her allegiances and her example are taking a toll on this Administration.

Like liberalism, globalism is another political cancer targeting the notions of G-D, family, country, patriotism.

Alas, the President has an increasing number of globalists in his immediate entourage.