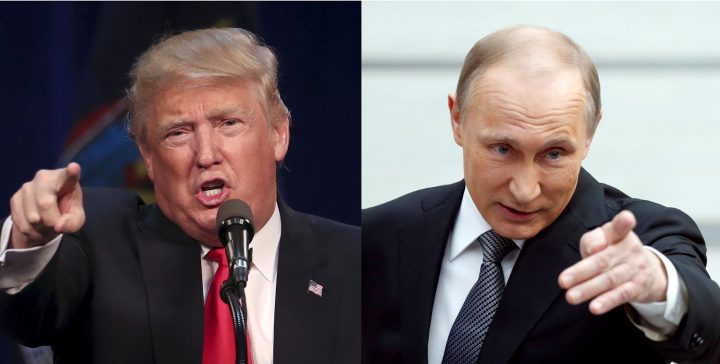 Among all the leaders I have admired in recent decades, Vladimir Putin stood tall, especially on foreign affairs.  I saw him, from outside Russia, as an ideal president defending his country’s sovereignty.

When Donald J. Trump launched his candidacy, I knew he was going to be America’s next President.  The idea rejoiced my inner political streak, as I saw Trump as an ideal and complementary counterpart to Putin.

Sadly, as President Trump was inaugurated, he underwent a shocking metamorphosis from his first days in the race.

Initially, Trump swore he was not going to take any money from donors and he did not.  That was in the primaries though.

Next, we saw him accepting donations from the likes of Sheldon Adelson, Steve Wynn, and others.

But, what has been most shocking was to see him nominating the globalist sharks, civilians and generals alike to the leading positions in his Administration.

The Russian President has made it no secret that he was not going to abide by the rule and the law of globalism.   At this point, the globalists’ red light went off.

Putin’s interest is not only to protect Russia’s sovereignty but also to expand its territory if possible.

Who can blame him?

After all, China’s vast territory contains over a billion population.  India’s population is also over one billion.

Then comes Islam with over 1.5 billion population and their foot soldiers disguised as terrorists and civilian migrant troops, invading a peaceful pussified West.

Thus, it is no wonder that the Russian President is keen on trying to expand the land he governs while he can.

Meanwhile and despite cooperating with the Obama regime, Putin had an adversary in him, mostly due to his globalism.

In comes Donald Trump and the Russian looked at it favorably.

Be it as it may, the President has positioned a most powerful pawn on his side of the chessboard, his globalist daughter.

Ivanka Trump’s husband preceded her in the entourage of the President.  Jared Kushner

Jared Kushner did not waste a second to present his father-in-law the key globalists who have secured key roles within the Trump Administration.

People like Rex Tillerson, Gary Cohn, and all the other Goldman Sacks elements, as well as Mr. Trump’s set of generals he has chosen and to whom he is delegating horrendous decisions such as war and peace, are the epitome of committed globalists.

Unsurprisingly, the news is reporting that rioters are busily trying to disturb the meeting.

They are unaware that insiders are already doing the job.

“There is no specific agenda.  It’s really going to be whatever the President wants to talk about.”

Well, I do not believe a word of the above statement.

To confirm my fear suffice this piece of news:  “A day before meeting Putin, Trump rebukes Russia in his strongest terms yet.”

“A day before he is slated to meet with Russian President Vladimir Putin, President Donald Trump criticized Moscow’s actions in the strongest terms he has used as president.

“We urge Russia to cease its destabilizing activities in Ukraine and elsewhere, and its support for hostile regimes including Syria and Iran, and to instead join the community of responsible nations in our fight against common enemies and in defense of civilization itself,” Trump said in Warsaw.”

With this, it is evident that the globalists that Trump has sadly put in key positions in his Administration are pulling the strings and the President is willingly obliging.

Regarding Syria, globalists cannot wait a day to bring down President Assad and replace him with the murderous Muslim terrorists from the Islamic State who would, in turn, impose sharia law in an until now secular Syria.

I count on President Putin’s strong personality, vast knowledge, and determination, to make clear his position to Trump.

The Russian, who is not shy, will lecture Trump with the Truth, regardless of what the anti-American globalist generals may say.

Only then will we appreciate the intensity of the brainwashing the American President is foregoing.

One thing is sure, it is that it was truly overdue but the wait has been worthwhile.  Finally, Trump meets Putin.