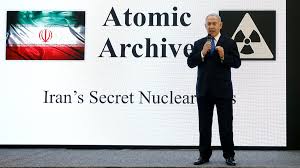 Iran lied, said Israel’s Prime Minister Benjamin Netanyahu.  But, this was undoubtedly nothing new for the former IDF officer from the most elite group Sayeret Matkali.  After all, Taqiyya is a “must” in the world of Islam, where Muslims have the right and the duty to twist and turn, or even omit, the truth, to advance the principal goal in their existence:  The conquest of the West and the forcible conversion of infidels to Islam.

Prime Minister Benjamin Netanyahu unveiled a massive cache of secret documents, obtained in an exceptional Israeli intelligence operation this year, showing that Iran had developed a secret nuclear weapons program and that it lied when it claimed otherwise.

Making sure to captivate international attention, Netanyahu spoke in English as he described a massive Israeli intelligence coup by which some 100,000 documents – weighing around half a ton – were brought from Tehran to the Jewish state.

The Prime Minister had the full support of the findings of the prestigious Mossad which ensured the most powerful effect of his presentation.

He showed Iranian leaders repeatedly declaring their country harbored no ambition for building nuclear weapons.  He then smoothly pointed to photos, videos, blueprints and other evidence Israeli agents had harvested, he said, that showed the Iranians had been deceitful all along.

Mr. Netanyahu said that Iran had intensified its efforts to hide evidence of its weapons program after signing the nuclear deal in 2015, and in 2017 moved its records to a secret location in Tehran that looked like “a dilapidated warehouse.”

The senior Israeli official, who spoke on the condition of anonymity to discuss a secret mission, said that Israel’s Mossad intelligence service discovered the warehouse in February 2016, and had the building under surveillance since then.

Mossad operatives broke into the building one night last January, removed the original documents and smuggled them back to Israel the same night, the official said.

Iran lied big time indeed, and PM Netanyahu could demonstrate at his leisure the extent of that lie.

The documents show that Iran’s Fordow nuclear plant was “designed from the get-go for nuclear weapons for project Amad,” Netanyahu stated, referring to the secret Iranian nuclear project codenamed “Amad.” Netanyahu said Amad had been shelved in 2013, though he claimed work in the field had continued.

The newly appointed US Secretary of State Mike Pompeo has come forward and vouched for the authenticity of those Iran Atomic Archives presented by the Israeli PM.

US Secretary of State Mike Pompeo, until last week director of the CIA, said Monday that Israel’s newly released package of intelligence on an Iranian nuclear weapons program was authentic and much of it was new to US experts.

Pompeo met Israel’s Prime Minister Benjamin Netanyahu on Sunday at Israeli military headquarters and was briefed on the material, which was released as Washington’s new top diplomat flew home.

“We’ve known about this material for a while, and we certainly discussed this material yesterday when we were together,” Pompeo told reporters on his plane.

Iran lied.  No doubt about that.  Again, it is the Islamic Taqiyya that is at fault.

As a Jew and even though I am sometimes at odds with PM Netanyahu, this is a significant feat that we must be proud of and celebrate.

The complexity, the lengthy period, the tenacity and the almost nanometric precision in the execution, are worthy of the most influential countries on earth which also happen to be the largest, and by that, I refer to the United States and Russia.

The fact that tiny Israel performed this prowess makes us proud to our core.

An Israeli cabinet minister has come up with maybe an even more critical conclusion beyond the revelation of the mythomaniac Iranian falsehood.

According to him, his country’s dramatic seizure of what it purports to be Iran’s nuclear program archive could help deter the Islamic Republic from trying to strike Israel.

Israeli minister Yoav Galant told Israel’s Army Radio he suspected Trump was leaning toward nixing the deal, which would likely lead to a growing confrontation between Israel and Iran. But he said Israel was prepared and doubted Iran would challenge Israel, given the humbling blow it was delivered.

“Anyone who saw the intelligence achievement can also understand what our military capabilities are,” he said. “I assume that everyone around us will think long and hard before they try to harm Israel.”

That said, I would be remiss if I did not acknowledge the Real Doer of this miracle, the Only One:  G-D who was the First One to pronounce the word Israel, and to whom I bow in submission and thankfulness.